Ah, the tail end of summer.  It’s good to be a corgi dancing at the shore.

We are having a drought here in Northern California, so my vegetable boxes went unplanted this summer.  Never fear!  Amaranth seedlings, volunteering from one tiny plant I bought at the farmer’s market a few years ago, have sprung up everywhere and the pendulous spikes of fuzzy magenta flowers now grace my otherwise dreary garden.  What a remarkably versatile plant.  You can cook the grain or eat the leaves or just enjoy the crazy flowers.

In other surprises, two amaryllis plants that were supposed to be dying back (since Christmas) have pushed up marvelous summer blooms.  I suppose that’s the natural thing for them to do, after all.  One is an ordinary red one from Trader Joe’s that is many years old.  The other is a ‘Lady Jane,’ putting on a much better show than it did at Christmas.

The last surprise is the little forest of daylilies that arose from a bulblet cloned by my daughter in freshman biology lab at Mount Holyoke, oh, six years ago now.  For many years we didn’t know what we had as we got only a sad single shoot that would die back.   It probably didn’t help that the poor bulblet had been rattling around in my daughter’s backpack for about three months before resurfacing.

It was fairly discouraging until I was advised by Mike’s Backyard Garden to repot and be patient.  With all that growing and dying back, the five-year-old bulb finally got the oomph to put out a flower and the elegant Stella was born, shown here with Luigi.

While she was at it, Stella threw off several potfuls of baby bulblets.  I replanted the bulbs and put them outside to brave conditions beyond my indoor intensive care unit.  This year we are watching to see what we will get.  More of the same or an oddball mutation?  The first of this year’s plants has just bloomed!

So, while my drought-stricken garden is bare of tomatoes, we still have some things to watch and cheer along. 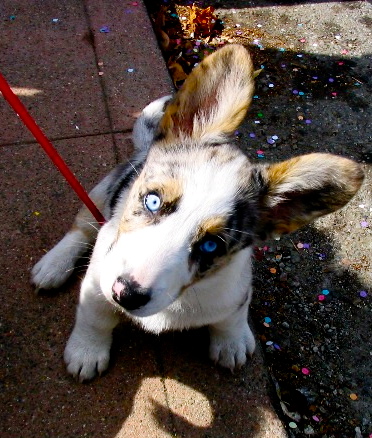 Here’s the thing about baby corgis, nobody believes they’re a real kind of dog.  Do not get a corgi puppy, especially a blue merle cardigan corgi, if you value your privacy.   People will jump out of their cars to talk to you about your dog.  First, they will ask what kind of dog he is.  Then, they will tell you that he is not a corgi.  They will tell you he is an “interesting mix.”  Sometimes they propose that he is an Aussie-Basset or maybe a husky mix.  It is best just to nod agreeably because you will never convince a doubter that he really is a corgi.